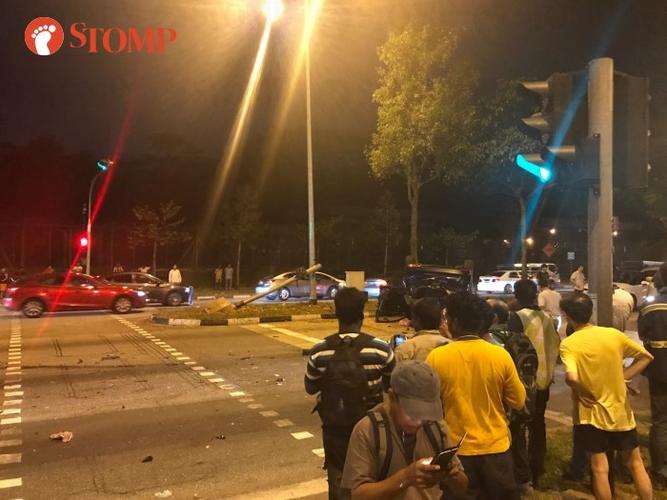 A shocking accident at the junction of Woodlands Avenue 12 and Avenue 1 yesterday evening (Aug 7) left one male motorcyclist dead and four others injured.

In response to media queries by Stomp, the police said that were alerted to the accident, involving a car, a lorry and two motorcycles, at 7.34pm.

A video, which several Stompers alerted Stomp to, shows a car that was travelling in the opposite direction hit a traffic light and flip over the central road divider, before ramming into the motorcyclist.

The 30-year-old motorcyclist, understood to be Muhammad Khairman Mohamed Sabari, was pronounced dead by paramedics at the scene.

In the clip, a second biker, believed to be a Malaysian, is also seen crashing into the overturned car, before getting knocked off his motorcycle.

He lay injured on the road as several other motorists and passers-by rushed to his aid.

A one-year-old infant from the car was also conveyed conscious to KK Women's and Children's Hospital. The lorry driver had no visible injuries.

The 32-year-old male car driver was subsequently arrested for causing death by a negligent act and police investigations are ongoing.